After our Santa Rosa Easter Sunday walk, Krystal and I proceeded to nearby Cabuyao town.

A long time ago, the northern part of La Laguna province was once a very huge town. It used to comprise what are now known as San Pedro, Biñán, Santa Rosa, Cabuyao, Rizal’s beloved Calambâ, and perhaps areas of today’s Santo Tomás town in Batangas province. This large lakeshore town was then known as Tabuco (usually spelled as Tabuko).

Like in many parts of the pre-Philippine era, Tabuco was then inhabited by people who originated from Malay nations. When Manila was possessed by Miguel López de Legazpi in 1570, he sent his grandson, Juan de Salcedo, to explore these parts of La Laguna de Bay. But the first indio settlement conquered by capitán de Salcedo was the lake’s eastern portion known today as Taytay and Caintâ in the province of Morong (now Rizal province). Afterwards, he and his men crossed the lake and Acherón at Barrio Pinagsañgahán (now known as Pagsanján, La Laguna). They continued inland and conquered the nearby settlements of Nagcarlán and Majayjay, also in La Laguna.

Since the place was already mountainous, the party of de Salcedo went back to the Lake of Bay (or Ba-í) and continued to conquer the lakeshore’s northern settlements. Later on, they anchored along the shores of Tabuco. Just like the settlement of Bay, the Spaniards discovered that Tabuco had large plains and thick forests. Among them who were knowledgeable with agriculture agreed that Tabuco’s climate was also suitable to farm crops.

On 16 January 1571, Miguel López de Legaspi converted Tabuco into an encomienda or a town under the helm of Gaspar Ramírez. The barrios of Malabanan (Biñán), Santa Rosa, and other territories was placed under the administration of the Tabuco government. The boundary to the north was: San Pedro Tunasán (which was also a part of Tabuco; it is now simply known as San Pedro; Tunasán is now a mere barrio or barangáy of Ciudad de Muntinlupà); to the south was the town of Bay (a stone’s throw away from Los Baños); west was Suñgay (now divided into two barrios of Ciudad de Tagaytay, Cavite: Suñgay del Norte and Suñgay del Sur), and; to the east was the Lake of Bay (or Laguna de Bay).

A couple of years later, the barrios which made up Tabuco became independent from the local central government. Barrio San Pedro (my current residence), for instance, became a separate town on 18 January 1725. Biñán, Santa Rosa, etc. followed suit. All that is left of that local government is what we now know as the Municipality of Cabuyao, the town that is sandwiched by the cities of Santa Rosa and Calambâ.

Up to 1997, the people of Cabuyao celebrated 16 January as their town’s feast day. But former Santo Sepulcro (in Landayan, San Pedro) parish priest Monsignor Jerry Bitoon changed it to 23 February which is the feast day of Saint Polycarp. 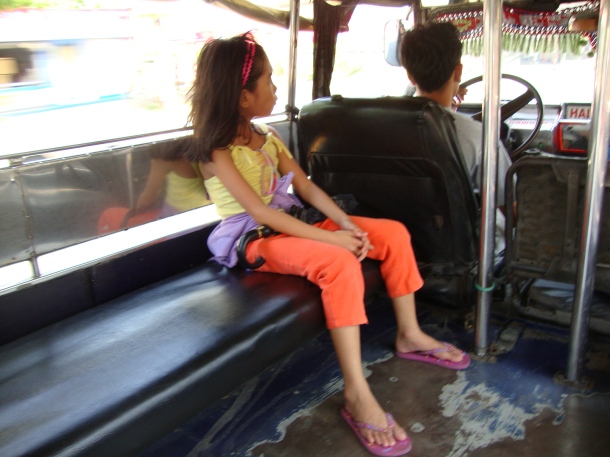 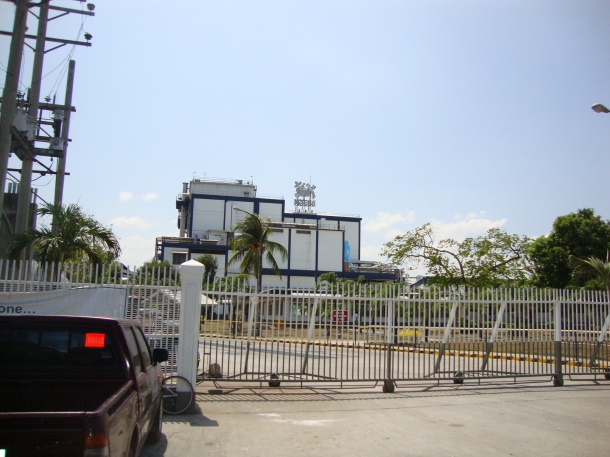 A Nestlé Philippines plant along Mahárlica Highway is one of Cabuyao's industrial engines. A dear uncle of mine was a top-ranking manager here before he transferred to Malaysia. 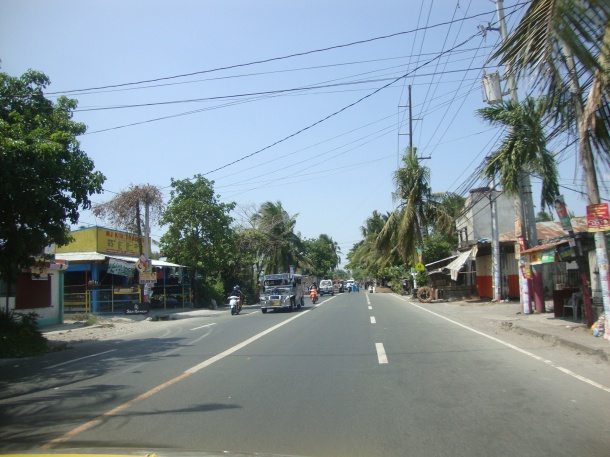 When Tabuco was transformed into an encomienda, The Order of Missionaries of the Augustinian Recollects arrived. This is, of course, due to the fact that the receiver of the grant (which, in this case, was Ramírez) had the responsibility to protect the indios from warring tribes (and from warring against each other), to teach them the Spanish language, and to Christianize them. A little later, the Augustinian Recollects handed Tabuco over to the Franciscans.

Like most towns, Cabuyao also has its share of legends as to how its name originated. It is said that when the Franciscans arrived by boat, they saw women washing clothes along the lakeshore. They asked these women the name of the place. Due to language barriers, the ladies thought that the friars were asking for the name of the fruit extract that they were then using to wash their clothes. These fruits were from the nearby cabuyao (or cabullao) trees. And so these unknowing ladies replied “cabuyao” to the friars. Another similar version says that the women thought that the friars were asking for the names of the trees growing around the wharf where they first docked.

In compliance to Spain’s Christianization mission, the friars started building a stone church for the indios in the second half of the 1700s. It was actually the second church to be built since the first one was destroyed by floods and strong waves. The church was finally finished some time in 1771. It was dedicated to Saint Polycarp — bishop, martyr, and titular head of the Catholic Church in Asia.

Thankfully, the church has retained its original feature throughout the years. It is also famous for having the controversial secular priest Father Mariano Gómez of the GómBurZa as its parish priest from 1848 to 1862. Together with the town’s alcalde, José Deasanta Rivera, Fr. Gómez built a cemetery in front of the church on the right side of the tribunal. Eerily, this site is now the home of the Monastery of Saint Clare.

During the American era, The Church of Saint Polycarp was witness to the town’s single bloody event in its history: the Sakdalista attack of 1935. The Sakdalista was an anti-American movement founded by Senate employee Benigno Ramos (the same man who, together with Artemio Ricarte, organized the infamous MAkabayan KAtipunan Ñg Mg̃a PILIpino or Alliance of Philippine Patriots, more popularly known in its abbreviated form MAKAPILI). When Ramos’s opposition to the Tydings-McDuffie Law failed (because he demanded for the Philippines’ absolute independence from imperialist US), his 20,000-strong group attacked 14 towns in various provinces. One of the ill-fated towns was Cabuyao, La Laguna. Today, one can still see bullet marks within the vicinity of the church.

Crossing a road to get to Cabuyao's parish church. 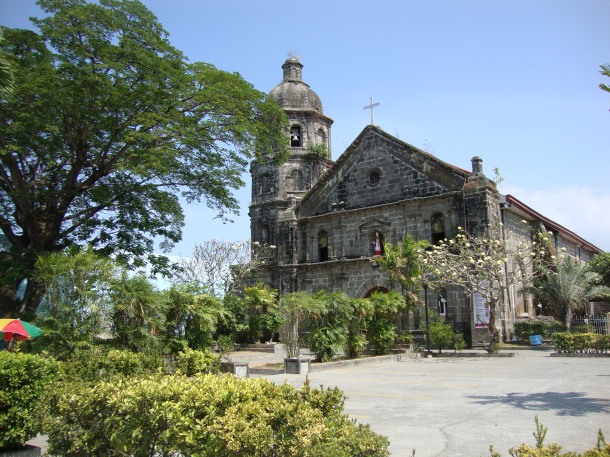 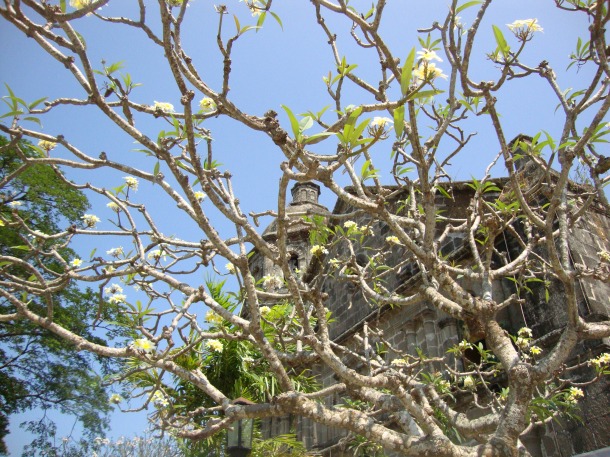 Shrouded by an acacia tree. 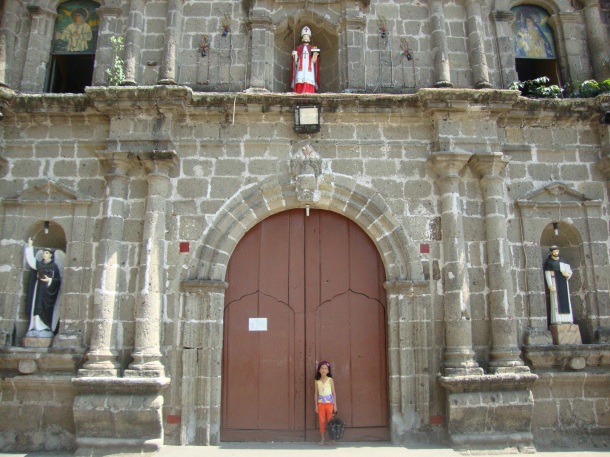 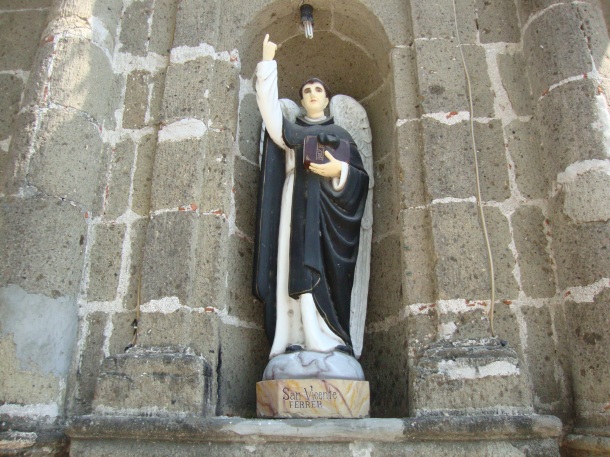 St. Polycarp, the martyred Christian bishop of Smyrna (in parts that is now covered by the Republic of Turkey).

Liceo de Cabuyao, located within the vicinity of the Church of Saint Polycarp. 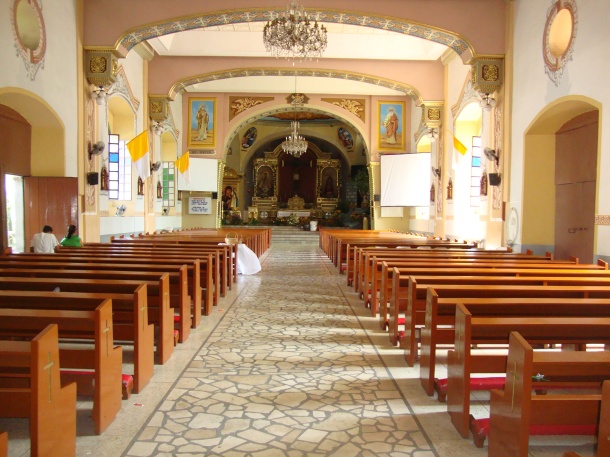 The church's nave is not that long.

The simple yet appealing altarpiece. 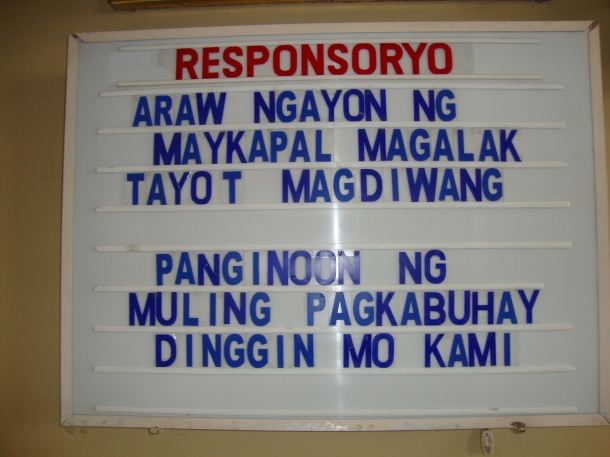 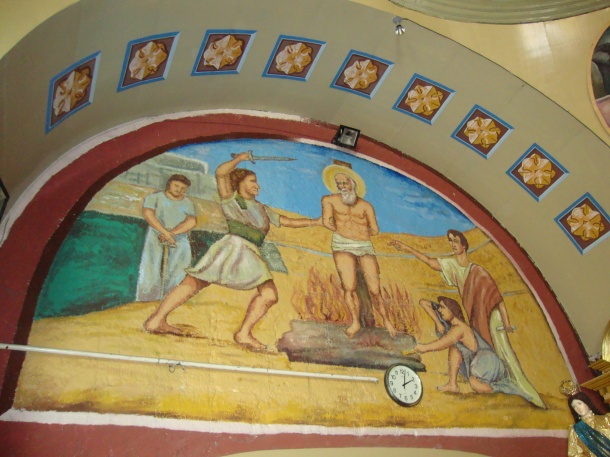 A painting of Saint Polycarp being martyred (somebody get rid of that wall clock, hahaha!).

A chapel dedicated to the Saint Polycarp, located inside the church's north transept.

The church's old bell, dating back to the Spanish times. No longer in use due to a crack, it is now on display outside the church. I wasn't able to figure out if it was made by Hilarión Sunico of San Nicolás, Manila because the bell was protected by a steel fence. 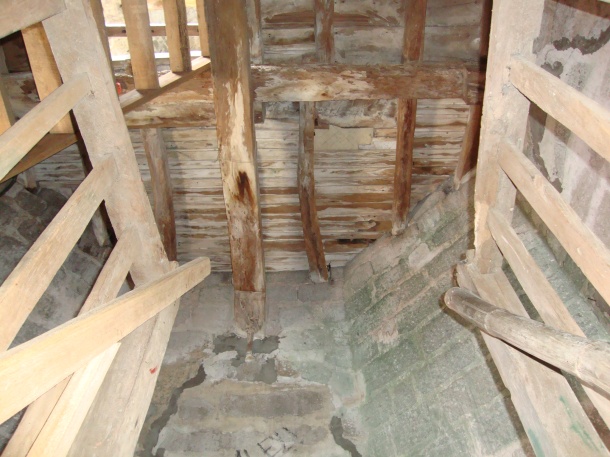 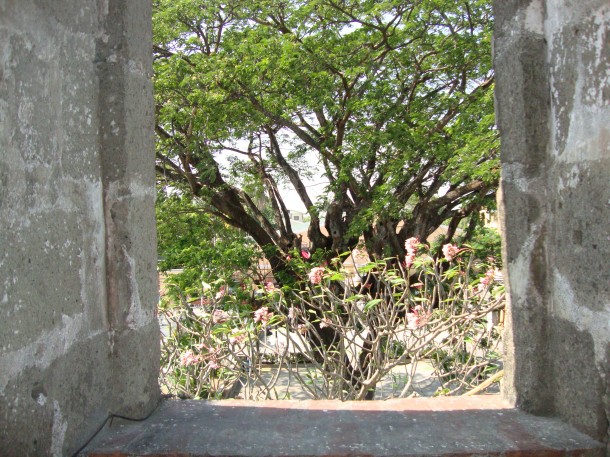 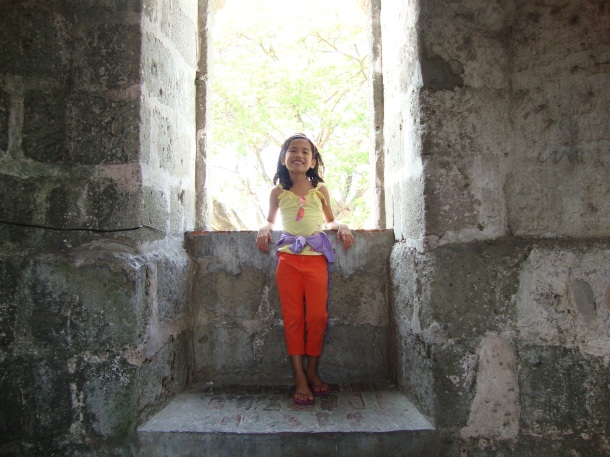 A wall painting at the choirloft, probably of a saint. I asked the choirmaster who she is, but he didn't know.

Krystal with the young choir. 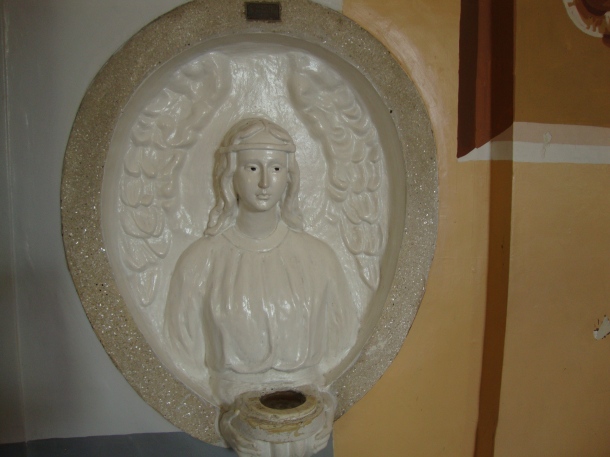 The choirmaster did not allow us to go further up the church tower.

The entrance to the Monastery of Saint Clare fronts the church and the town plaza. 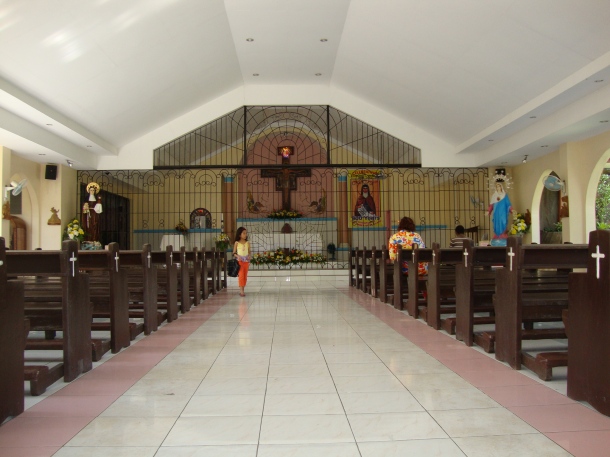 A wide chapel within the monastery grounds. 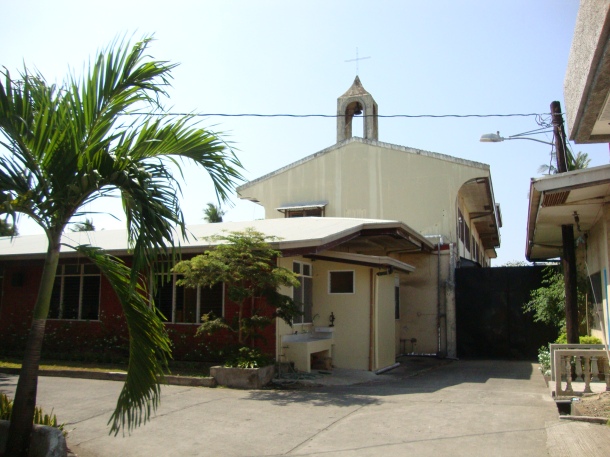 The town plaza is in front of the monastery and beside the town church. 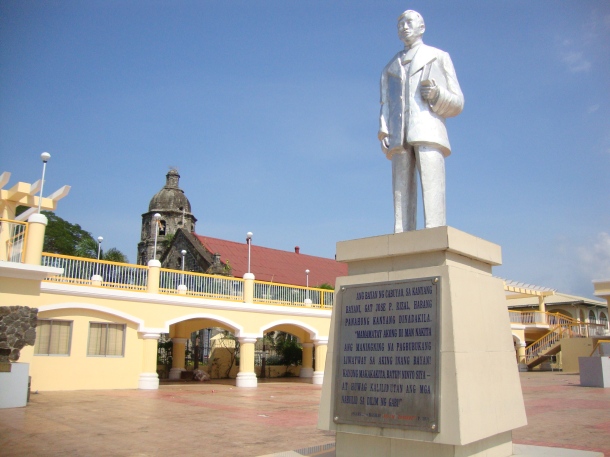 Only a handful of Antillean houses or bahay na bató is left here in Cabuyao. Fortunately, they are well taken care of by the owners. 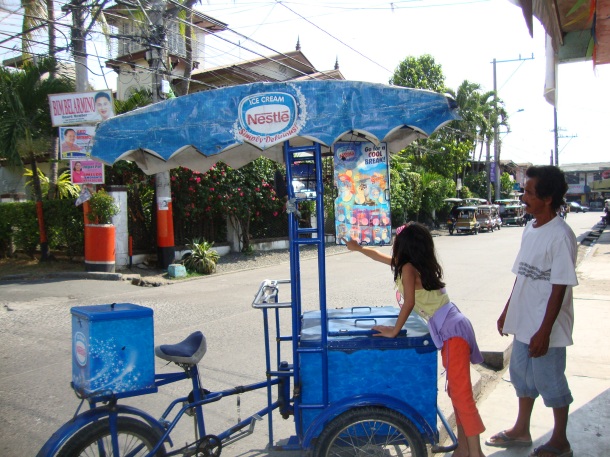 Nestlé break. A show of support for Uncle Amador Alas y Évora who helped my family dearly many years ago. =) 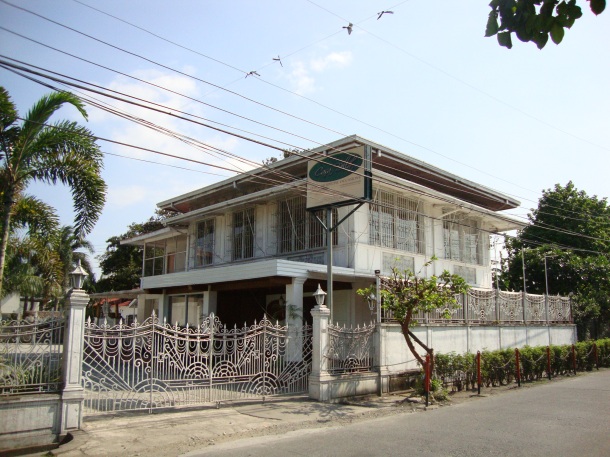 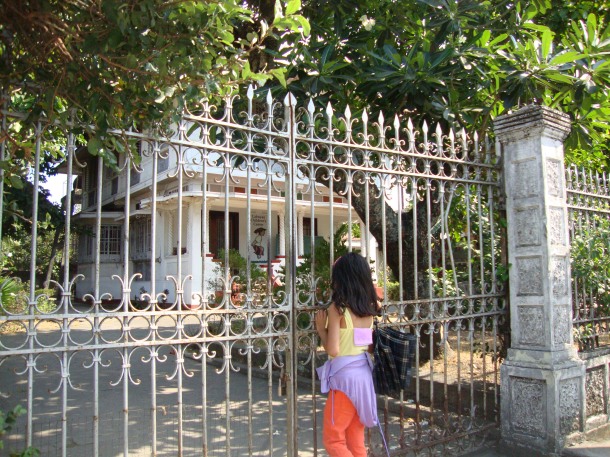 I had a hard time taking a picture of this house, whether near... 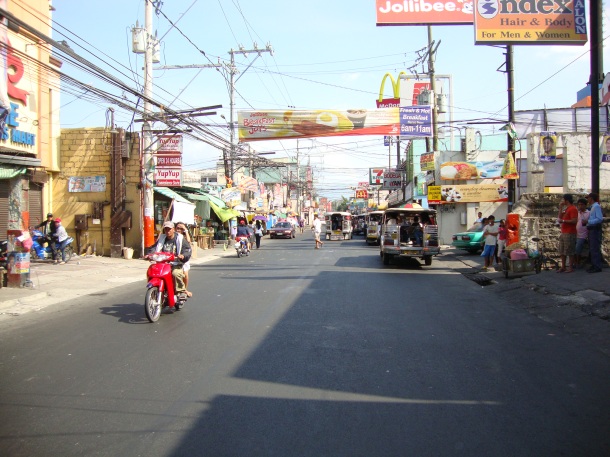 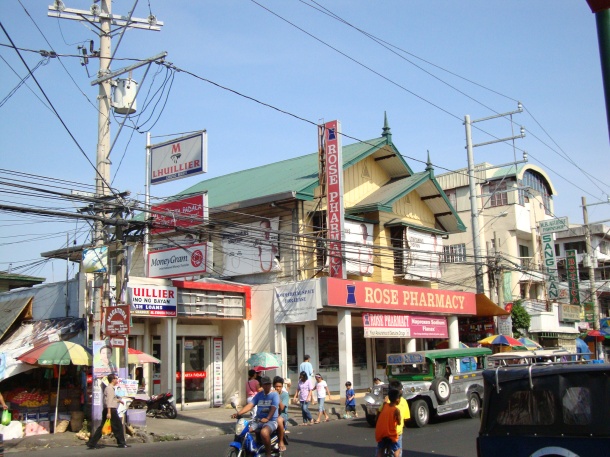 Like the UnionBank branch in Santa Rosa whose photo I took, this bahay na bató is now known as Rose Pharmacy. 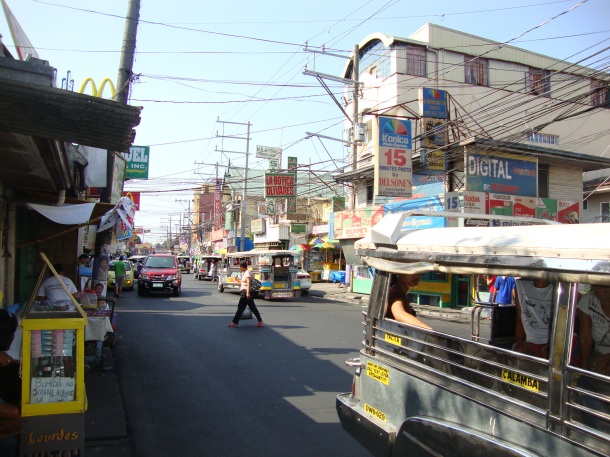 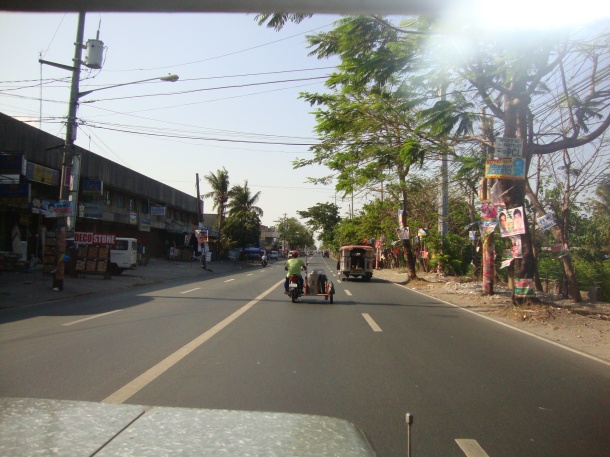 I just love taking pictures of roads (especially the smooth ones) while inside vehicles!

It is sad to note that Cabuyao has somehow lost its touch of rural charm, something that the Philippines is known for, and something which still sparks our generation’s childhood delights and memories. The curse of cityhood is slowly creeping into the municipality. Gone are the large farmlands and thick forests, and its share of the lake is not fit anymore for swimming nor frolic like it used to be in the glory old days of Spanish Philippines. But the unchanging Church of Saint Polycarp and the few remaining bahay na bató still stand as living testaments to this town’s hispanic past.