Finally, a travel blog that I could call my own!

Actually, not just mine, but my family‘s. 🙂

LA FAMILIA VIAJERA, probably the country’s first and only family travel blog (if there’s already a Filipino blog that has claimed the title first, feel free to pinch my ears when you get to see me). The blog features our very humble exploits wherever our itchy feet take us. It was soft-launched last October 21, two days after we roamed the ancient streets of Intramuros and took photos of fancy stuff there.

Fancy stuff that is our heritage.

Since LA FAMILIA VIAJERA is a family oriented blog, I will be much tamer there. I will try my best not to sound belligerent, no anti-imperialism remarks, no clenched fists raised high above the air, and no Rage Against the Machine blurting out in the background. All that indignation is reserved only for FILIPINO eSCRIBBLES and ALAS FILIPINAS (I said I will try my best).

OK. I’ll shut up now and let my third blog do the talking. Please click here for my family’s first entry to its online travelogue.

And oh, did I forget to mention? My long-time nemesis Carlos Celdrán is featured there. Believe it or not. 😀

PS: And since I’d be traveling with my wife and four kids in LA FAMILIA VIAJERA, there will be no more travel blogposts in ALAS FILIPINAS and FILIPINO eSCRIBBLES from now on.

It may seem improper to share to all of you today one of the best and greatest moments of my life, my wedding, especially on a time like this (re: the earthquake crisis in the Visayas). But more than a month after that simple yet historic Filipiniana wedding of ours, news about it came off the press just this morning… so maybe its better if I attempt to offset all the bad vibes besetting the Catholic Church in Bohol and Cebú with this article…

The bride, wearing the traditional baro’t saya and a long veil topped with a tiara of sampaguita flowers, arrived in a horse-drawn carriage at the San Pedro Apostol Parish Church in San Pedro town in Laguna.

The groom, who sported a black suit that matched his bowler hat and cane, waited for her at the church’s doorstep.

Without the usual wedding frivolities, they exchanged vows—in Spanish—in the Mozarabic Rite of Toledo held on their 14th anniversary as a couple.

Special thanks to Maricar Cinco for the excellent photo and write-up. 🙂

For whom the bells toll: unity against government corruption

A few days before last Friday, I saw this announcement on my Facebook timeline: 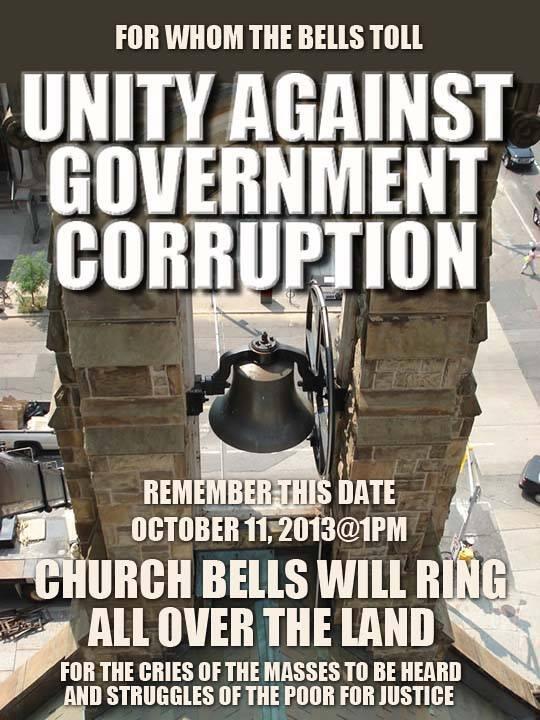 I haven’t been joining protest marches since my forgetful days as a young student activist. Truth to tell, I no longer believe in the power of mass protests, especially in our times when the powers-that-be are at their strongest. Anyway, I had half a mind attending the nationwide pealing of all church bells although our parish church is just a safe walking distance from our apartment. I thought of maybe just listen to the pealing of the bells from our balcony and utter a short prayer to help combat government abuse of the pork barrel.

Friday arrived and it was dark and drizzling, all the more reason to completely cancel my plans of witnessing the pealing of the bells. But for some inexplicable reason, something stirred me from my laziness to attend. So I took up my camera and told Yeyette that I had to cover the event, maybe take a short video of it then go home immediately.

Upon arrival at the church, the drizzle became all the more incessant. I looked up towards the bell tower, but saw nobody up there. I looked around for any sort of activity pertaining to the ringing of bells against government corruption.

I went inside the church and saw only carpenters and stone masons (our church is currently under renovation). Perhaps there are people already in the campanario? I decided to have a look and see, introduce myself as a local blogger and one of Mayor Baby‘s writers (more on this in a future blogpost), and ask permission if I could record what they were about to do.

I’ve climbed up our bell tower numerous times already. It wasn’t easy this time because of a lot of construction materials being hoarded in there at the moment. Upon reaching the top of the bell tower, I was dismayed to find out that nobody was there. And it was less than five minutes till 1:00 PM.

Probably nobody in the parish office heard about this call for holy solidarity against a secular evil that is currently besetting the country. Or perhaps they already knew but they didn’t care at all? Really, I dunno.

I looked down towards the parish office. It was closed, and nobody seemed to come out towards the bell tower to ring its old Sunico bell. I harkened in the cold air, straining hard to listen if other nearby parishes were already ringing their respective bells — nothing but vehicular traffic noise. There was no more time to go down to the parish office and inquire. Using my initiative, I had no other recourse but to ring the bell myself.

It was my first time to ring a church bell, so pardon me if I was tolling it lightly. Besides, I was a bit nervous that the people overseeing the parish office might come out and climb angrily towards me. But then I already thought of a justifiable excuse that what I was doing was all over the news, and that they should update themselves once in a while. Surprisingly still, nobody went up to check. It’s either I was really tolling it lightly and they didn’t hear it, or maybe they did but they never cared at all.

I just tolled it for a few minutes, especially since it wasn’t safe for one’s ears to ring a church bell at a very close distance (stupid me, I should have pulled the rope connected to the bell which is right below the campanario).

Did the tolling of church bells against the pork barrel made any difference? Since I myself have already believed in the ineffectiveness of street protests against government iniquities, what difference does the harmless pealing of bells make? Not much. But I think the Church in this country needed to have a voice to speak out against the pork barrel scam. Just last August, news broke out that retired Monsignor Josefino S. Ramírez was renting a posh property owned by controversial Janet Lim de Nápoles for a whopping ₱280,000 a month, making everyone think where does he get all that cash. And even before that, there were already reports that some priests were in the payroll of Nápoles via her dubious company.

The CBCP commented on the issue, even releasing a strongly worded statement last September 5 against pork barrel misuse. But everybody, most particularly the very meek anti-Catholic kiddos in social media, were too busy condemning the priests in particular and (quite laughably) the Church in general. They were, indeed, having a field day.

The tolling of the bells, at least to my mind, was supposed to be another Church statement against thievery in the government. Last Friday’s church protest was more palpable. And if I may add: just in case those priests connected to Nápoles did err, it was just them, not the Church as a whole.

I just hope that if ever there will be another call for unity like this, there would really be a show of unity. Not to mention coordination. I’m trying hard to remember the last time that all the church bells in the entire archipelago were tolled; I couldn’t remember any event.

On another note, ringing those bells myself made it all the more enjoyable as I already have a personal connection to the San Pedro Apóstol Church because that is where I was wed during last month’s Friday the 13th…

Oh shucks… the WEDDING!!! I haven’t even written anything about it yet here on this blog!

OK, up next: OUR FILIPINIANA WEDDING! Stay tuned, folks! 😀

To my fellow Filipinos: be aware, be PROUD, of who and what you really are.

“To accuse the Spanish, over and over again, of having brought us all sorts of things, mostly evil, among which we can usually remember nothing very valuable, ‘except, perhaps,’ religion and national unity, is equivalent to saying of a not very model mother, that she has given her child nothing except life, for in the profoundest possible sense, Spain did give birth to us — as a nation, as an historical people. This geographical unit of numberless islands called the Philippines –this mystical unit of numberless tongues, bloods and cultures called a Filipino– was begotten of Spain, is a Spanish creation. The content of our national destiny is ours to create, but the basic form, the temper, the physiognomy, Spain has created for us.”

You can’t continue being a Filipino if you continue harboring a hatred of our Spanish past. That glorious epoch is what created us.