Today we commemorate the most important day in all of Christendom…

It’s coming next weekend, folks! See you there!

Monument dedicated to Abelardo “Captain Remo” Remoquillo. He died for his country fighting the Japanese invaders when he was only 22 years old. What were you doing when you were his age?

On 8 December 1941, nine hours after the fall of Pearl Harbor, the Commonwealth of the Philippines was attacked by the Imperial Japanese Army (IJA). The Filipinos, confident as they were, were caught in surprise at the swift entry of Japanese troops in many parts of the country. Despite the practice brownouts that were done in preparation for an impending attack, many of them were still caught in shock at the brazen display of Japanese aggression towards what was then deemed unconquerable — the United States Army Forces in the Far East (USAFFE).

It is fortunate that the whole country did not suffer the wrath of Japanese aggression. As can be gleaned throughout World History, wars were usually fought in capital cities and other major areas. In the old town of San Pedro Tunasán in the province of La Laguna, it was relatively peaceful throughout the three years of Japanese occupation. Even during that one bloody month in 1945 (February 3 to March 3) when both Japanese and US artillery flattened Intramuros into rubble, San Pedro Tunasán was spared despite the scary fact that it stood only 29 kilometers away from the country’s capital.

One might think it odd why a promising young man from San Pedro Tunasán joined the painful resistance against the Japanese invaders. As a bright student taking up law, Abelardo Remoquillo had an exciting life ahead of him. He could have declined the conscription (such cases happen in real life), made excuses, or simply escaped with his family away from the frightening violence of war. But he didn’t. And when his military commanders sent him and other young men home because resisting the Japanese offensive was already hopeless, he took a different road: he joined the guerrillas instead, much to the puzzlement and surprise of those who had been observing his life, a life that was, from childhood, reared in a loving, peaceful home. From that daring decision of his alone to continue taking up arms against the Japanese can we trace the first few glints of heroism. We can, furthermore, assess the assertiveness of education into the lives of the studentry during those times. It must be emphasized that Abeling did not take up military science as a college course. His military training was merely a subject, a school requirement. Nevertheless, when the country needed its young men to take up arms against foreign invasion, those conscripted were already geared up for battle even without formal training in a bona fide military school such as the Philippine Military Academy (PMA).

Abeling, as how he was called by those who knew him personally, was a true blue San Pedrense. He first saw the light of day on 27 December 1922, at a time when the country was occupied by the United States of America, during the unpopular regime of Governor General Leonard Wood. He was the eldest in a brood of ten (eight boys, two girls). His father, José Remoquillo, was then the municipal treasurer (agent-collector) while his mother, Valeriana Hermosilla, was a full-time housewife who oversaw the upbringing of all their children. The Remoquillo brood were as follows (from eldest to youngest): Abelardo, Vicente, Felicitas, Jaime, Benjamín, Angustia, Manolo, Galileo, Frolín, and José. As was the custom during those days, all the children were born through a comadrona (midwife)…

…With the kind of life that Abeling had led, a fateful death was only a matter of time. But Abeling himself didn’t foresee a hero’s death. In fact, and inspite of his dangerous situation, he never planned on dying at all. For him, he was merely fulfilling a mission; he was still raring to come home. But it was Fate that willed his untimely death. His first and last letter to his father, written in matter-of-factly English, reveals this:

Please receive two hundred tablets of sulpatiazole (sic) from Lt. (José) del Rosario. This medicine is part of our loot from the Los Baños Interment Camp.

Itay, please secure some chicos for him so he could take it to Manila for his mother. This fellow is a very good friend of mine and he has helped me all the days in my stay here in Pila so it is time for me to pay him back thru you. Extend to him all the facilities — accommodations and food. The medicine he is giving you is from him — he gave it to me.

Itay, tell Inay and others that I am well and fine here — so do not worry about me. I didn’t even get a scratch. I hope to go home when Calamba and Los Baños are completely liberated then these places will be cleared of Japanese. Somehow I have to stay here, our work is still unfinished.

So long and sweet kisses to everybody there.

The Remoquillo clan posing in front of Capt. Remo’s monument at the old town plaza of San Pedro Tunasan. The elderly gentleman in front (wearing military cap) is Capt. Remo’s younger brother Vicente. He was the one who gave the author of this blogpost much needed information about the adventurous life of young Capt. Remo. Click here for more photos of today’s event.

The book will be launched soon, this October!

TNT is now officially the oldest student-based theater organization in Adamson University which started life in 1986. “This is a milestone for all of us; three decades of fruitful and meaningful journey for our beloved organization is no ordinary feat!” according to TNT Alumni Association president Teri Onor a.k.a Dexter Domínguez. The celebrity and Board Member from Bataán assumed the TNT alumni presidency post on 1 January 2016 after its two-term president, Mark Anthony Legaspi, succumbed to diabetes complications in December last year, shortly before the New Year.

“I am personally excited on the synergy that we will work on with Adamson University management, specifically the Cultural Affairs Office and the Adamson Grand Alumni Association. We have a pipeline of projects that we will pursue in the coming months aimed to nurture and advance the performing arts in Adamson,” added by Onor.

TNT Alumni Association was formed in 2009 in time for the 2011 silver anniversary of the group. Since then the association has been helping the school-based members financially for their production and marketing of their show. “This year, our assistance to TNT school-based and to our alumni will now include livelihood and medical assistance and we are also launching very soon our scholarship grant to deserving school-based or TNT alumni dependents,” said Onor.

The anniversary night paid tribute to the 1986 founding members of TNT and also bestowed a posthumous recognition to Mark Anthony Legaspi for his contribution and dedication in TNT; the award was received by his brother John. The event also announced TNT’s 2016 recipients of the Eduardo Alcalde Achievement Awards: María Vicenta Medina, United Nations (UN) volunteer for war-torn countries, and;  Adel Argüel, professional stage actress and senior artist of The Art Production. Pásig Congressman Román Rómulo provided the keynote speech while GMA-7 artist Boobsie Wonderland gave a surprise performance for the TNT alumni crowd.

The TNT anniversary night was preceded by a weeklong exhibit held at the Adamson Cardinal Santos Walkway from February 1 to February 5, 2016.  The exhibit showcased various memorabilia and rare photo collections of the different productions and projects of TNT done in the last 30 years. The exhibit was formally opened by OIA – Director Eva Dulay, TNT Alumni President Teri Onor, and TNT alumna and Showtime Kalokalike 2013 Grand Winner Jenny Catuyong.

“The presence of TNT in Adamson is a testament of the University’s holistic student formation that is not limited only to excellent academic programs, but also takes care of the different facets of student interest, such in our case the performing arts” according to TNT alumni public relations officer, Allan Catli.

Learn more about the upcoming productions and projects of Tinik ng Teatro; visit their Facebook fansite at www.facebook.com/TinikNgTeatroAduOfficial. 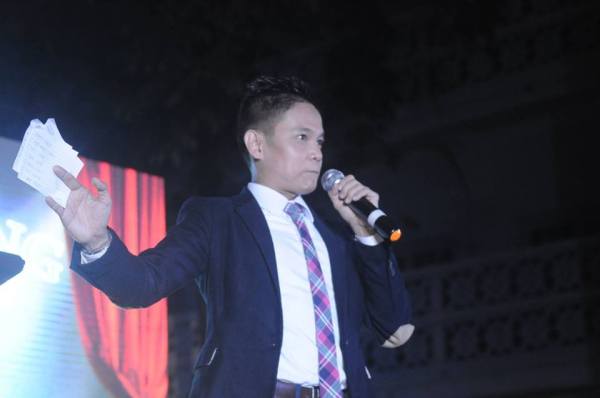 TNT Alumni Association President Dexter Dominguez a.k.a. Teri Onor delivering his plans and programs for the alumni association and the school-based members of TNT in Adamson University. 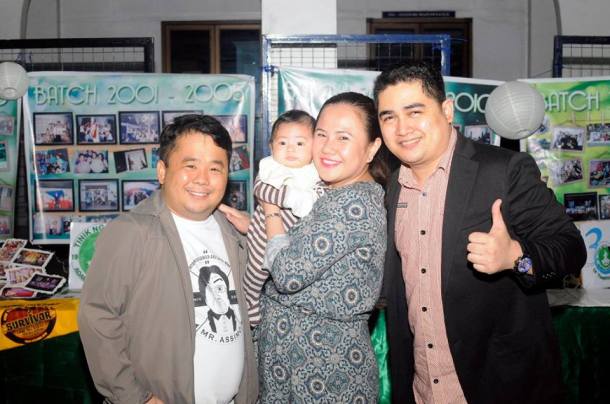 Timeless neoclassical thespians of TNT, stronger and bolder than ever, celebrating 30 years of stage excellence in Adamson University!