Rainy days of recent weeks brought back beautiful and exciting memories of last year’s Allah Valley Familiarization Tour, particularly our journey to enchanting Lake Sebú. It took place during my “birthday week” (July 14-18, 2013), and it was my first trip to Mindanáo where I got to meet some of the most interesting people. For most part of our tour, it was either raining or drizzling, but it never spoiled our “vacation”, at least for my part.

I got lucky to have been part of that tour which was composed of well-known travel bloggers and writers as well as representatives from the Department of Tourism. Together, we traveled to many parts of Cotabato del Sur (South Cotabato) and Sultán Qudarat, or those places pertaining to the Allah Valley region. But what was perhaps the most thrilling place we visited was Lake Sebú in Cotabato del Sur.

Lake Sebú is a large natural lake located in the municipality which also bears its name.* Situated in the nature-tinged province of Cotabato del Sur and within the Allah Valley region, it is recognized as one of the country’s most important watersheds as well as a major tourist attraction in Mindanáo. The lake region is beautifully surrounded by rolling hills and thickly forested mountains and is the home of the T’boli, the extremely friendly indigenous peoples of South Cotabato.

Up in the frosty mountains of Barrio Lamfugon, Lake Sebú, on our way to a T’boli community within the forest. And for my first spelunking experience (07/15/2013). 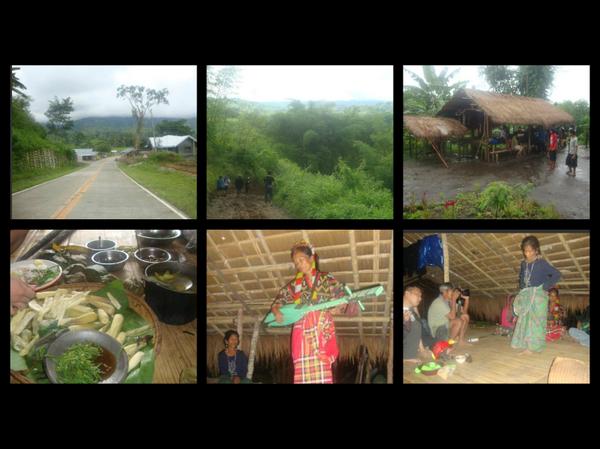 After exploring Cofnit Cave all drenched and muddy, we were forced to spend the night with the T’boli community in the highlands of Mount Lambilâ because the trail towards the town proper got really muddy due to nonstop rains. It was chilly all through the night, but an unforgettable one nonetheless because we immersed into the T’boli culture. There were lots of singing, dancing, and even poetry! (07/15/2013)

Ida and master travel photographer George Tapan with our T’boli friends, right before our trip back to the lowlands. (07/16/2013)

A tour guide introduces us to Laang Dulay, the famed T’boli “dreamweaver” of the colorful T’nalak cloth. The delicate and intrinsic geometrical patterns of the T’nalak cloths that she wove (such as those behind her) originated from her dreams, thus the “dreamweaver” tag. (07/16/2013) 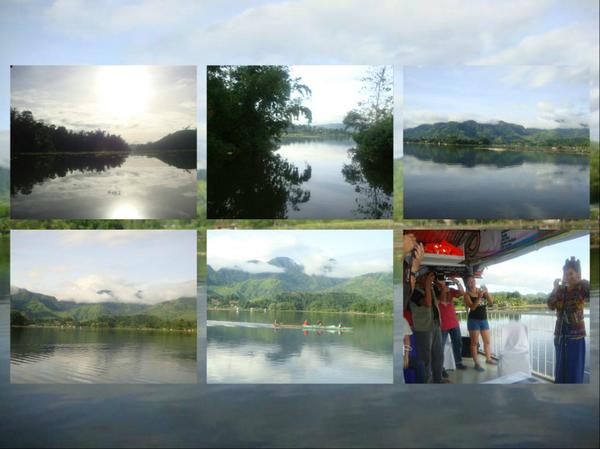 Sceneries around Lake Sebú on board our cruise and breakfast tour provided by Mountain Lake Eco. Resort (07/17/2013)

The enchanting blogger known as Pepe Alas below the breathtaking but deadly Hikong Alo waterfalls and rapids of Lake Sebú with THE George Tapan of travel photography fame and Ida. Photo by Ron Yu. (07/17/2013)

So enchanting were the sceneries, stories, and people of Lake Sebú that they inspired one of us to make a film! Writer Ida Anita del Mundo (daughter of a living film legend) was roused by our Lake Sebú sojourn to write and direct her first indie film, K’na, The Dreamweaver. It’s one of the entries to this year’s Cinemalaya which opens tomorrow night.

No wonder she seemed catatonic for most part of the tour! She was subconsciously cookin’ up something, after all! 😀

I told Ida many weeks ago that I’d tag my family along to watch the screening of her film. Unfortunately, because of my wife’s delicate pregnancy, we won’t be able to do so anymore. Lo siento, señorita. But she has already seen the stunning trailer and she has nothing but praises for it. Judging by the trailer alone, this movie is in a class of its own.  Wifey and me would be surprised if this film does not win a major award. We’re both disappointed, though, that we won’t be able to see the full movie. It was supposed to be the first indie film that we’d ever watch, believe it or not. But here’s hoping that a DVD of K’na, The Dreamweaver will come out in the near future.

But how enchanting is Lake Sebú, really? To those who won’t be able to travel there the soonest, I suggest you check out Ida’s jaw-dropping art film to find out.

Click on the photo to view the full schedule of shows at the CCP and Ayala Malls!

The Municipality of Lake Sebú was once a part of the Municipality of Surallah. It became a separate municipality on 11 November 1982. On the other hand, Surallah was founded on 19 June 1961 and was one of the 11 original municipalities of Cotabato del Sur when the latter province separated from the much larger province of Cotabato on 18 July 1966. Cool. So I share the same birthday with the province. Maybe I should move my family there permanently. And you better believe me when I say that it’s not a bad idea. 😀

It’s not everyday that you get to meet a National Living Treasure Awardee. Here I have the rare opportunity to meet Lang Dulay, the famed T’boli “dreamweaver” of the colorful T’nalak cloth. The delicate and intrinsic geometrical patterns of the T’nalak cloths that she wove (such as those behind us) originated from her dreams, thus the “dreamweaver” tag. Strange but true.

I think I have overused the word AWESOME since Sunday. 🙂

But to begin with, my apologies to Dennis Dolojan for using the title of his soon-to-be-iconic website as my blogpost article. I couldn’t help it because it’s catchy, it’s hip, and “LOVE MINDANÁO” are the only fitting words (aside from AWESOME) that I could utter upon visiting and touring that beautiful island for the first time in my life!

Although I don’t exactly tag myself as a travel blogger (because I really am not), I had the privilege to be invited by the Allah Valley Landscape Development Alliance to help promote the region’s ecotourism potential. Also invited are more renowned travel bloggers (such as “prim-and-proper” Gael Hilotin and “oozing-with-sexiness” Gay Miriel Mitra-Emami), members of the media, officers from the Department of Tourism, my boss Ronald Yu (of In-Frame Media Works), and world-renowned photographer George Tapan. 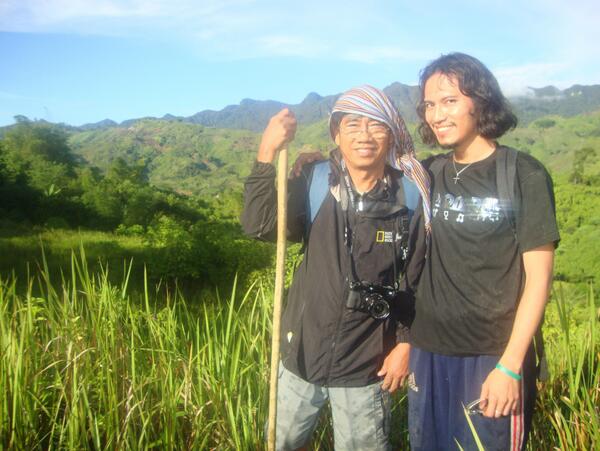 With world-famous and award-winning travel photographer George Tapan somewhere on the heights of Mt. Lambilâ, Lake Sebú, Cotabato del Sur (07/16/2013). Tito George also happens to be a distant relative of mine (he’s from Unisan, Quezon). We just couldn’t figure out how exactly; for all we know, he could be my nephew, haha! 😀

Unfortunately, it’s getting late. And because of the week’s activities, I’m now exhausted and spent. So I better hit the sack and leave you guys hanging for a while, hehe! But don’t worry; in the coming weeks, I will definitely serialize on this blog the fun (mis)adventures that I experienced in that promising land in the south that has been unfairly tagged by the media as a dangerous place to visit. For now, all I can say is that “Muslim Mindanáo” is a dirty myth.  And it is NOT TRUE that the whole island of Mindanáo is dangerous. During my brief stay there, I have never felt so secure (and even carefree) for a long time. I even had to be more alert in the asphalt jungles of Metro Manila than in the rough roads leading to the jungles of the Allah Valley. Simply put, Mindanáo is REEKING of FUN and ADVENTURE! So far, my brief Mindanáo sojourn has been the most AWESOME birthday week I ever had!

And happy 4th anniversary to this blog which still has more or less six or seven clueless fans, LOL! Cheers, everyone! 🙂