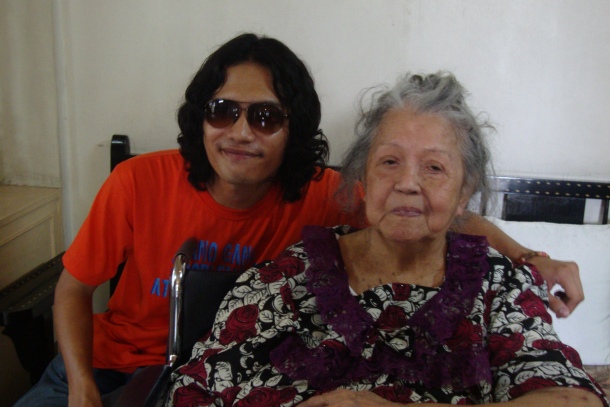 Del Pilar died for country and principles. But precious time that was supposed to be for his wife and two young daughters Sofía and Anita went with him to the grave. Despite of it all, Lola Bening was still proud of his Lolo Celo for his patriotism.

Last 5 September, I had the rare opportunity to “speak with history” when a cousin of my dad, Paul Évora III, happened to read the article that I wrote about del Pilar which coincided with the national hero’s 160th birth anniversary. He was the one who arranged my lunch meeting with Lola Bening. And since, to the best of my knowledge, I have never met Uncle Paul all my life (I found him only through this wonderful online creature called Facebook), little did I know that his partner, Corina Unson, is actually the youngest daughter of Lola Bening.

We were welcomed by Uncle Paul and his gracious better half at their homely enclave within the bustling party district of Malate. For me, it was a queer sight to see such a handsome bahay na bató in highly urbanized Manila, still standing proudly and mysteriously behind a youngish narra tree (the house sometimes spooks the wits out of unknowing passersby, Uncle Paul told me).

The Marasigan-del Pilar ancestral house. At the gate are Uncle Paul, Yeyette, and Auntie Corina.

Lola Bening, despite her old age (she was born on 4 April 1918), was still sharp of mind. Very sharp. Like her grandfather, she used to be a writer. In fact, her English translation of her grandfather’s Spanish letter to her Tía Josefa landed a spot in Dr. Celedonio G. Aguilar’s Readings In Philippine Literature (Rex Book Store, Ciudad de Quezon, 1994). Trained as a laywer, she wrote numerous articles but mostly about her favorite subject: Philippine History.

“When I was a student at the University (of Santo Tomás), I befriended the librarian there. Once, I asked her if I could gain access to the archives to read the works of my grandfather, “La Frailocracía Filipina” and “La Soberanía Monacal en Filipinas“. I was hoping that I could translate them (from Spanish into English). When I was not allowed access, I spoke with the rector who explained to me that ‘the times have already changed’, that it is really not necessary to read them anymore.” I immediately understood the reason why she was denied access. I explained to her that due to the anti-Catholic content of the two essays, the Catholic university thought it best not to have them exposed to a new generation of Filipinos who no longer deserved a useless war between the religious and secular thought. But I assured her that translations are now available everywhere, including the internet.

If not for her blindness, I am quite certain that Lola Bening would still be writing.

Lola Bening also recounted how her family lost their fortune due to her grandfather’s costly eight-year self-exile in Barcelona, Spain. Whenever they could, the family sent del Pilar money to sustain himself as well as to keep his anti-clerical activities up and running. Although a devout Catholic, Lola Bening seemed not to be ashamed of her grandfather’s stance towards the friars because she believed that what del Pilar did was right and was for the benefit of the masses.

After del Pilar’s death, the family was somehow able to rise from the ashes of poverty due to the hero’s youngest daughter’s marriage to businessman Vicente Marasigan.

“On the day of my mother’s marriage, she was crying the whole time because she never wanted to marry my father,” said Lola Bening. The reason? “It was a planned marriage. And besides, my mother preferred to study than get married.” She then bade us to a sepia photo hanging on the sala wall to examine the countenance of her then young mother who was with her father. The photo was taken shortly before the marriage.

“Take a good look. Notice the sadness in her face. She was crying before that picture was taken,” Lola Bening added. 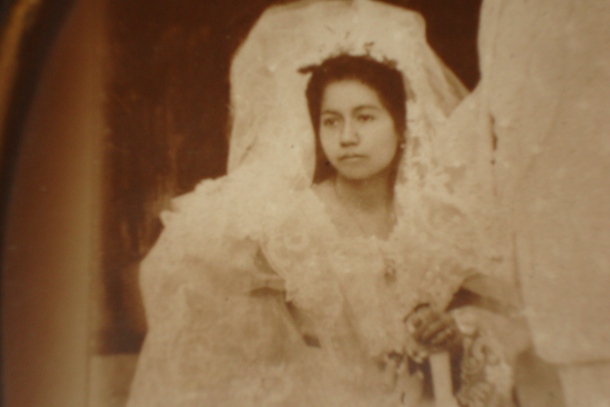 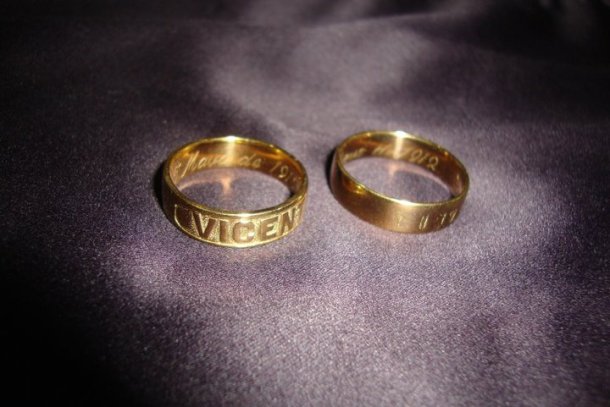 The wedding rings of Lola Bening's beloved parents, made of pure gold. They were married on 12 March 1912. The date is engraved in Anita's ring (the one with the name of Vicente engraved on it).

The couple's wedding rings with 13 gold coins or arras dating back to the Spanish times. The custom of giving 13 arras originated from Spain.

Fortunately for the rest of the family, Anita learned to love Vicente in the course of the marriage (Auntie Corina said that she and her siblings used to call them Lola Tâ and Lolo Tê respectively). The marriage produced nine children. As a testament of Anita’s background of grief, their first two children died. But as compensation —and quite ironically for the “Father of Philippine Masonry”— the Marasigan brood grew up to be god-fearing individuals. They were never influenced by their grandfather’s reputation as a high-ranking Mason. In fact, there were two religious among Vicente and Anita’s children: Ateneo de Manila University’s Fr. Vicente Marasigan, S.J., and; Sr. Mother Mary Aurora Marasigan of the Holy Spirit Adoration Sisters (she globally headed the “Pink Sisters” a record four times). Lola Bening herself had her schooling in two Catholic institutions: the University of Santo Tomás (which was then in Intramuros) and Saint Paul University Manila. She eventually took up law, but was never able to practice it fully; she taught law and history at Saint Paul and also served time as a corporate lawyer. However, her husband, the late Justice Arturo B. Santos, took her place in the practice of law and served as judge of the Court of First Instance of Tarlac, Branch II.

Lola Bening proudly said that her father once owned a handsome house along Calle Isaac Peral (now United Nations Avenue in nearby Ermita) which eventually became the model of and setting for Nick Joaquín‘s Portrait Of An Artist As Filipino (even the Marasigan last name Nick adopted into that play’s main characters, but in no way do the fictional Marasigan players reflected the lives of the real ones, said Auntie Corina). They had another house near the Remedios Circle. It was there were Lola Bening spent her earlier years before transferring to their present home (built in 1929) in Calle Miguel Malvar (first known as Tennesse street; renamed Mindoro Street during the Japanese Occupation).

At the height of the controversial snap presidential polls of 1986, Lola Bening was one of the leaders of the National Citizen’s Movement for Free Elections. During that stint, she was interviewed by a then struggling correspondent who later on became an Emmy-Award-winning journalist: Jim Clancy of CNN International.

During our lunch meeting, I was actually expecting to learn more about del Pilar (the man, not the hero) that I have never read nor heard before. Quite embarassingly, I was told of the anecdote of “Ang Piso Ni Anita“, something quite famous in the academe but was totally unfamiliar to me. However, I learned more about Anita and her pains throughout her life. Throughout her childhood, she was yearning for fatherly love. Lola Bening said that as a child, her mother used to look at photos of her dad, contemplating on how he looked like in person, asking her elders more about how her father’s physical appearance beyond the photos.

As history had taught us, Anita and her Ate Sofía (whom Lola Bening took care of during her final years) never saw their father again when the latter left for Spain in late 1888. All for the love of country. They saw him one last time, though — inside a coffin on a cold December day in 1920 amidst cheers from Masons and government leaders at the Manila pier. Then many years later, just as when Anita had learned what love is with Vicente, the latter was dead set on offering his services to join the struggle against the 14th Imperial Japanese Army. All for the love of country. A dramatic confrontation ensued, as witnessed by Fr. Marasigan (Auntie Corina shared that —fortunately for Anita— Vicente’s love of family prevailed over him).

Anita’s death was perhaps as painful as her depressing moments in life. In 1955, she suffered a stroke and was in comatose for 40 days before Death finally took pity on her.

Anita’s life was a revelation. Something about her story made me love my wife and kids more and more, for they never had to endure the sufferings of a sorrowful wife and fatherless children.

Lola Bening continued sharing her thoughts not only about her grandfather and Philippine history (she even knows the controversial and delicate issue of “Le Fableux Doña Ysidra” but was careful not to mention any name), she was also up to date with current events. A few years ago, at the height of the much-publicized Subic rape case, she advised close friend Fr. James Reuter, S.J. to be cautious in the issue that was then confronting American Lance Cpl. Daniel Smith. And wisely so because the much-beloved Jesuit became spiritual adviser to the accused and their respective families. His task indeed should be more spiritual than mundane. Fr. Reuter thus avoided the controversial political aspects where he would have been up against a much powerful force: the radical feminist groups who were behind Smith’s “victim”.

“In the end, to settle the issue out of court, they (the US government) gave her (Nicole, Smith’s purported rape victim) a US visa which appeared to be what she wanted in the first place,” said Lola Bening, “because, strangely, her relatives got to the US ahead of her!”

She also asked us about what we thought of Noynoy. I wisely decided not to comment since it’s too early into his presidency to do so. But she was an anti-charlatan when it comes to opinion. She was, after all, basing her viewpoints on account of her age and experience throughout the decades. She wisely observed that our country, throughout its sad history, has been led too much by the elite (Auntie Corina kidded her on this comment, pointing out as if she’s in a glass house throwing stones!). She observed how our country’s natural resources have been exploited by outsiders, and how the WASPs have thrown their weight around our national leaders. Classic features of neocolonialism, I commented. To which she replied:

“Maybe it’s time that we recover our identity.”

Indeed it is time.

I would have asked her more about Intramuros and the Spanish language during her heyday. But out of courtesy, I didn’t — the family invited me mainly because of what I wrote about Marcelo H. del Pilar, so it was expected that I ask more about the propagandist. Hopefully, I’d be able to talk to her again to learn more about my beloved Walled City which she saw before the last war destroyed it.

Throughout the end of the visit, Lola Bening exhorted me and Yeyette to visit the 4,027-square-meter Marcelo H. Del Pilar Shrine in Bulacán, Bulacán, the land of which she donated to the government in 1983. She was beaming with pride on how she had helped build the shrine together with the government, and contributed to its many modifications for the sake of national posterity.

As we said our goodbyes while promising her that we will visit her dear grandfather’s shrine very soon, my mind was somehow drifting towards that lonely Barcelona room where a tubercular propagandist, more in pain from being away from his wife and daughters than from his ailment, was quietly weeping while writing letters to his loved ones. And as my mind drifted, I dreamily promised Lola Bening that “we will visit the Mabini Shrine very soon.”

The 92-year-old lady, still sharp of wits, corrected this absent-minded 31-year-old blogger of his unforgivable mistake:

Undoubtedly, Lola Bening’s grandfather would have been as alert as her if only he had reached his 90s. But such is the grand design of our history. 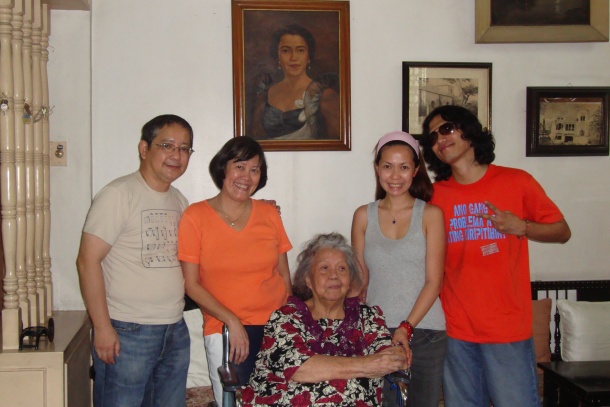